My Battle with Bipolar

Written by Joanna Fanuko  in category  My Story
April 1, 2017 It begins well: a happy home, a supportive family, an excellent student. I never showed signs of having a mental illness. There was the emotional stage going through puberty, but these were the things that I believe are typical of a teenage girl or boy. I got into a great college and was excelling there.

Dreaming of Paris all my life, I decided to study abroad in France. That is when the unthinkable happened. I was sexually assaulted, and it was done by two young men whom I knew (or thought I knew) fairly well. It took a long time to recognize the gravity of what had happened to me. I came home about a month after my program was complete, but told almost no one what had happened.

My junior year internship was coming up, and I began commuting into New York that summer. All seemed normal at the time. I was doing well at work, felt confident and productive, and then it hit me like a ton of bricks. Waking up from a complete fog in the middle of the night in downtown New York, I was completely disoriented and scared. Lucky for me, there was a police officer just down the block from where I awoke from my haze, and he called my parents.

Not knowing what to do, I was taken to the emergency room that morning in a state of distress. I thought everything was an alternate reality. The best way to describe it is to say that everything that I saw, heard, or touched around me seemed to be connected by some great cosmic plan. My clothes were intact, I had absolutely no drugs nor alcohol in my system, but I kept insisting that I had been drugged and raped. Tests were run on me, and the only explanation that doctors could give me and my family was that I had a psychotic break.

Terminology aside, the next couple of months were not completely unpleasant. I was taken to a mental health residential facility after being severely overdosed on a mood stabilizing medication, but the nurses, doctors, and other colorful characters who I met during this time kept me laughing and upbeat. In spite of the new and scary time for my family, I seemed to be in good hands.

Back to school … again

Taking a semester off from college in order to recover, I returned when I was well enough a few months later and resumed life as normal. No mention of sexual assault had been made while being treated. A common effect after a trauma such as rape is Stockholm Syndrome: I felt as though I needed to be closer to my predators, and felt as though they did no wrong for quite a while. I did not feel like the victim, so much as more the worthless girl who deserved what had happened. No one ever deserves sexual assault. It is a real crime and epidemic.

I later had the strength to confirm that what I had encountered was a real crime by doing research on the Department of Defense website. However, I was often told not to take action because it would lead to more stress for myself. The best I could do in order to get myself out of my depression was to speak up about it to friends, family, and supportive professionals.

Before reaching this point, I became catatonic from depression after the semester I completed going back to college. Still, this was scarier for friends and family than it was for me because I only remember bits and pieces. I received about ten ECT procedures in order to sufficiently pull me out of the nearly vegetative state. And thank God I did, because it pulled me out of the catatonia and I was able to go back to college a month later and complete my degree.

Things are looking up!

Things began looking up again. I found a great job after graduating and felt successful professionally and personally. But there was still something lying nearly dormant inside of me that was not addressed fully. After less than a year of going to work and feeling productive and happy, another ton of bricks hit me: I felt suicidal. It happened so abruptly that all I could do was to call my doctor in the middle of the day, and he made an immediate appointment for me to see him. He called the facility that had helped me twice before in so many ways, and he said: I have a bipolar patient who needs a bed. It was the first time I heard a label. I thought, “I’m bipolar? This is getting serious…” Labels aren’t everything, though.

Again, a short stint in the mental health facility and I was on my feet again, just with a new burden. I was bipolar. It shocked me. I bought every book about the disorder and tried to educate myself on something I was going through firsthand. Still, it felt overly critical. Every mood that I felt, I thought, “Oh I’m manic now,” or, “Aha! This is that nasty depressive episode that I was warned would come…” It was difficult to lead a normal life. I came to realize that there is no right way of living, and there is no perfection. This took a long time to accept, being the perfectionist I had grown up as.

I’m no doctor, but I have been on every medication under the sun. I cannot prescribe, but I know how each one affected me, and it has taken years to come down to the correct concoction. There were brief times when I completely stopped taking medication, with or without a doctor order, and I have to say that this is not smart. I could have risked seizure in doing this, and when I consistently worked with my current doctor in order to be able to get to this level of clarity and contentment without over-medication, boy, did that feel good. I never gave up hope that I would someday reach this point, though there were incredibly difficult periods of time where I came very close.

One last hurdle had to be jumped before I could reach my level of zen: the voices. I began hearing voices, again very abruptly. And they would not go away no matter what medication I took. It felt as though I was in that alternate reality again, with visualizations daily that were termed as hallucinations, and terrifying tactile hallucinations where I would wake up at night feeling as though I was being raped again. This was not a fun time, as one could imagine. And it lasted for three years, unbearably. Here is where the moral of my story comes in: what got rid of these voices and hallucinations. I spoke up, I told my family exactly what I was feeling and thinking, and I stopped being afraid.

I told myself that enough is enough and that this was a symptom of a disorder. Once this happened, and I explained it to my doctor and therapist, the voices disappeared. It felt like a true miracle. I sought help for myself, learned DBT skills which help me when I am distressed or in need of a mindful moment, and pushed from the darkness into the light again by taking care of my mind, body, and spirit.

I’ll leave you with this

My advice after all the turmoil is this: having a mental illness does not define you, and don’t let it! I was later diagnosed with PTSD, or Post-Traumatic Stress Disorder, and Schizo-Affective Disorder. The labels sound a bit worrisome, but there is treatment available if you are honest about what you are going through and seek help. Don’t focus on the label, but rather learning new ways to cope and deal with your situation. Some of the smartest and most creative talents and leaders have succeeded in spite of their mental disorders. And always speak up about what you are going through. You are not alone, and there are millions of others going through what you may be going through who can relate. Never give up hope, you can shine like the stars in spite of the darkness of night. 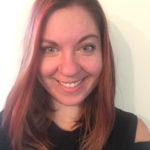 Joanna advocates for mental health and wellness through her writing and charitable work. She has a B.S. in Business Administration and Marketing from Carnegie Mellon University. She lives with her energetic poodle who provides her with “pet therapy” in the form of unconditional love.

Recommended
Panic Attack: Do’s and Don’ts
Panic Attacks...they suckIf you've ever seen someone have a panic…